Pictured here is the second situation in which we use the present perfect: when an action happened in the past but we don't know when. 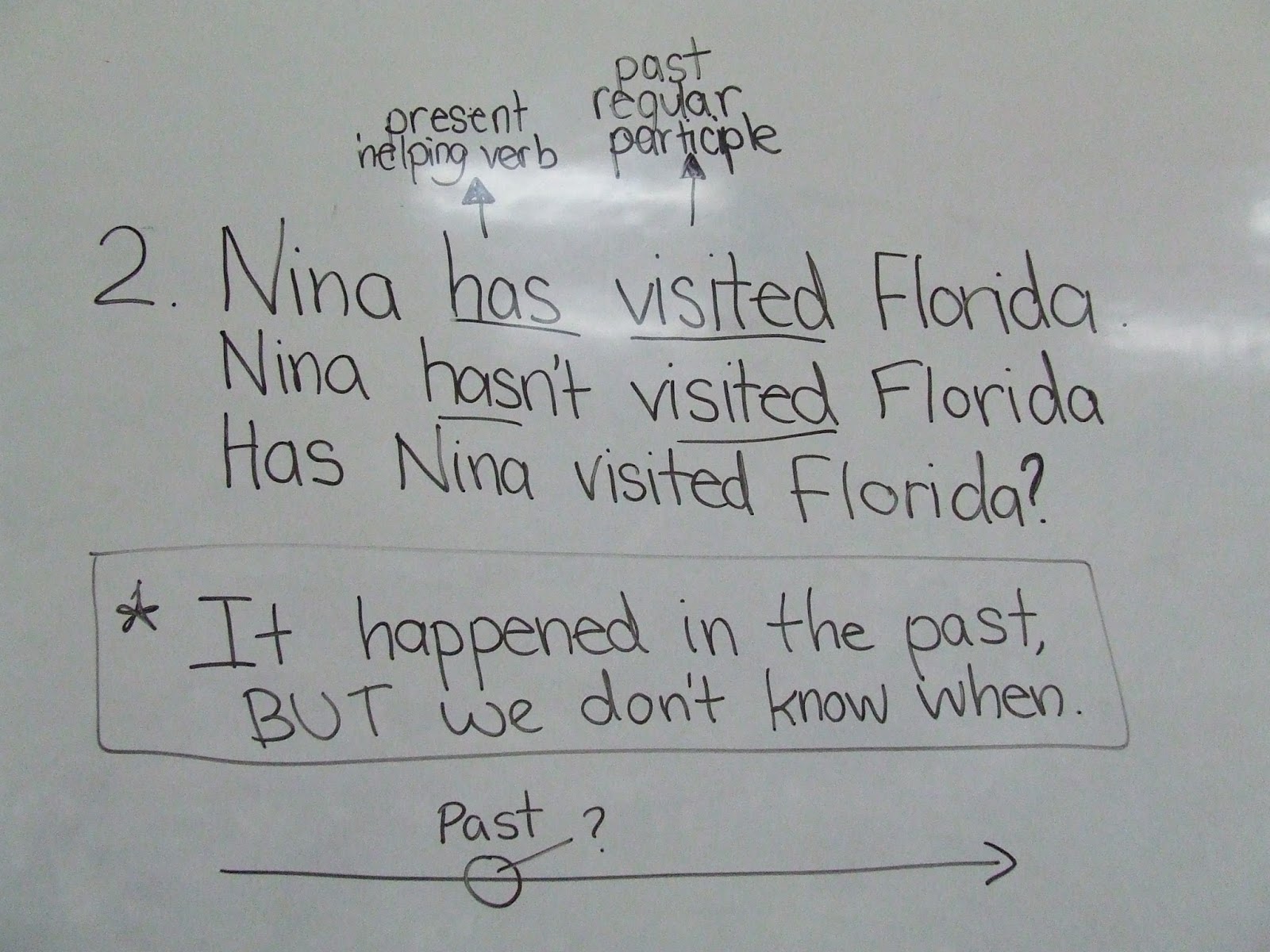 Last we did an activity in which students had to put the following sentences in the correct order using the present perfect. In order to make the activity more accessible for everyone, I gave them a lot of scaffolding and walked them through it.

For each sentence I asked them a series of questions:
1. What is the verb in the sentence? What is the past participle of that verb?

2. What is the subject of the sentence? Do we use has or have with that subject?
3. Is the phrase a statement or a question? Because of that, which goes first, the helping verb (has/have) or the subject?

And then they had enough information to tell me how to write the sentence correctly. By the end they were answering the questions much more quickly and seemed to really get it! 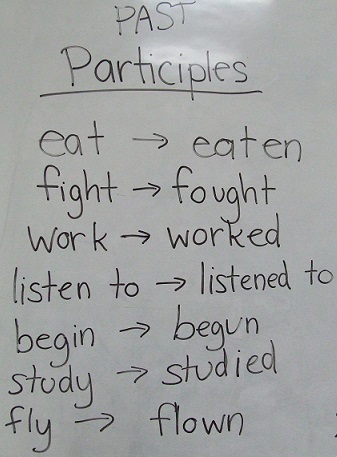 Posted by Brazil & United States at Thursday, September 19, 2013 No comments:

Today we worked on our English-language travel guide, which is now up (culturetins.blogspot.com) and will be added to in the weeks to come. We have groups writing on different aspects of Tocantins culture, such as food, arts and crafts, indigenous peoples, natural wonders, and cities. First, we reviewed some cardinal rules for writing so that students can write the best blog entries possible. Here they are:

**Rules for Writing**
1. Every paragraph should have an introduction and conclusion sentence


2. NEW idea = NEW sentence (commas are only for adding information to a sentence)
3. Subject-verb agreement, Parallelism (plural, maintain verb tense)
4. NEVER use "I" in academic writing
5. NEVER use the passive voice (I made a mistake vs. Mistakes were made)

Next week we will learn about American music. See you there!
Posted by Brazil & United States at Wednesday, September 18, 2013 1 comment:

I used the same lesson plan in this class that I used on the 12th of September in Basic English for Letras students.  (See that blog entry for more details).

However, one thing that I modified was the activity. To cater to a more Basic level of English, we did the pair activity as a class. Instead of having the students come up with questions in pairs, which would have been too difficult for them at this point, I came up with the questions and had them practice by answering. This was challenging for them but I saw improvement throughout the activity. I would hold up a picture and ask the students a question about something that happened in the picture. Some of my questions had affirmative answers and some of them had negative answers in order to help the students practice how forming the past tense is different in the two scenarios.

They seemed to understand the concept because they struggled at the beginning of class but by the end were speaking correctly and able to explain the reason why the affirmative and negative sentences were different in the past.

We also reviewed the verb TO BE in the past and discussed that it is the only verb that changes with different people in the past tense (other verbs remain the same, no matter who you are talking about).

Posted by Brazil & United States at Wednesday, September 18, 2013 No comments:

link to the song: http://www.youtube.com/watch?v=Om3mm2dv--k

We began class by going over the new vocabulary. 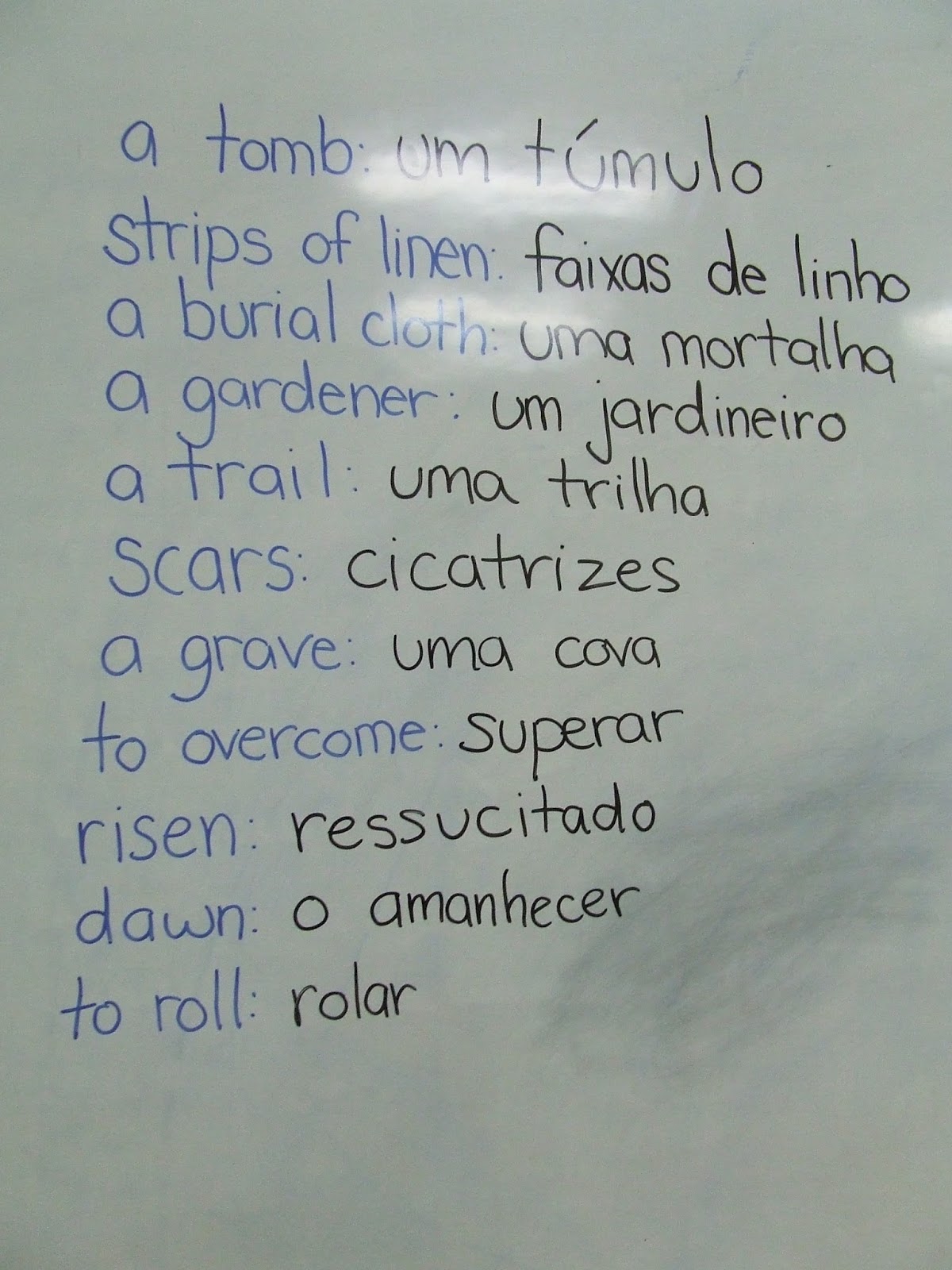 20 Early on the first day of the week, while it was still dark, Mary Magdalene went to the tomb and saw that the stone had been removed from the entrance. 2 So she came running to Simon Peter and the other disciple, the one Jesus loved, and said, “They have taken the Lord out of the tomb, and we don’t know where they have put him!”
3 So Peter and the other disciple started for the tomb. 4 Both were running, but the other disciple outran Peter and reached the tomb first. 5 He bent over and looked in at the strips of linen lying there but did not go in. 6 Then Simon Peter came along behind him and went straight into the tomb. He saw the strips of linen lying there, 7 as well as the cloth that had been wrapped around Jesus’ head. The cloth was still lying in its place, separate from the linen. 8 Finally the other disciple, who had reached the tomb first, also went inside. He saw and believed. 9 (They still did not understand from Scripture that Jesus had to rise from the dead.) 10 Then the disciples went back to where they were staying.

11 Now Mary stood outside the tomb crying. As she wept, she bent over to look into the tomb 12 and saw two angels in white,seated where Jesus’ body had been, one at the head and the other at the foot.
13 They asked her, “Woman, why are you crying?”
“They have taken my Lord away,” she said, “and I don’t know where they have put him.” 14 At this, she turned around and saw Jesus standing there, but she did not realize that it was Jesus.
15 He asked her, “Woman, why are you crying? Who is it you are looking for?”
Thinking he was the gardener, she said, “Sir, if you have carried him away, tell me where you have put him, and I will get him.”
16 Jesus said to her, “Mary.”
She turned toward him and cried out in Aramaic, “Rabboni!”(which means “Teacher”).
17 Jesus said, “Do not hold on to me, for I have not yet ascended to the Father. Go instead to my brothers and tell them, ‘I am ascending to my Father and your Father, to my God and your God.’”
18 Mary Magdalene went to the disciples with the news: “I have seen the Lord!” And she told them that he had said these things to her. 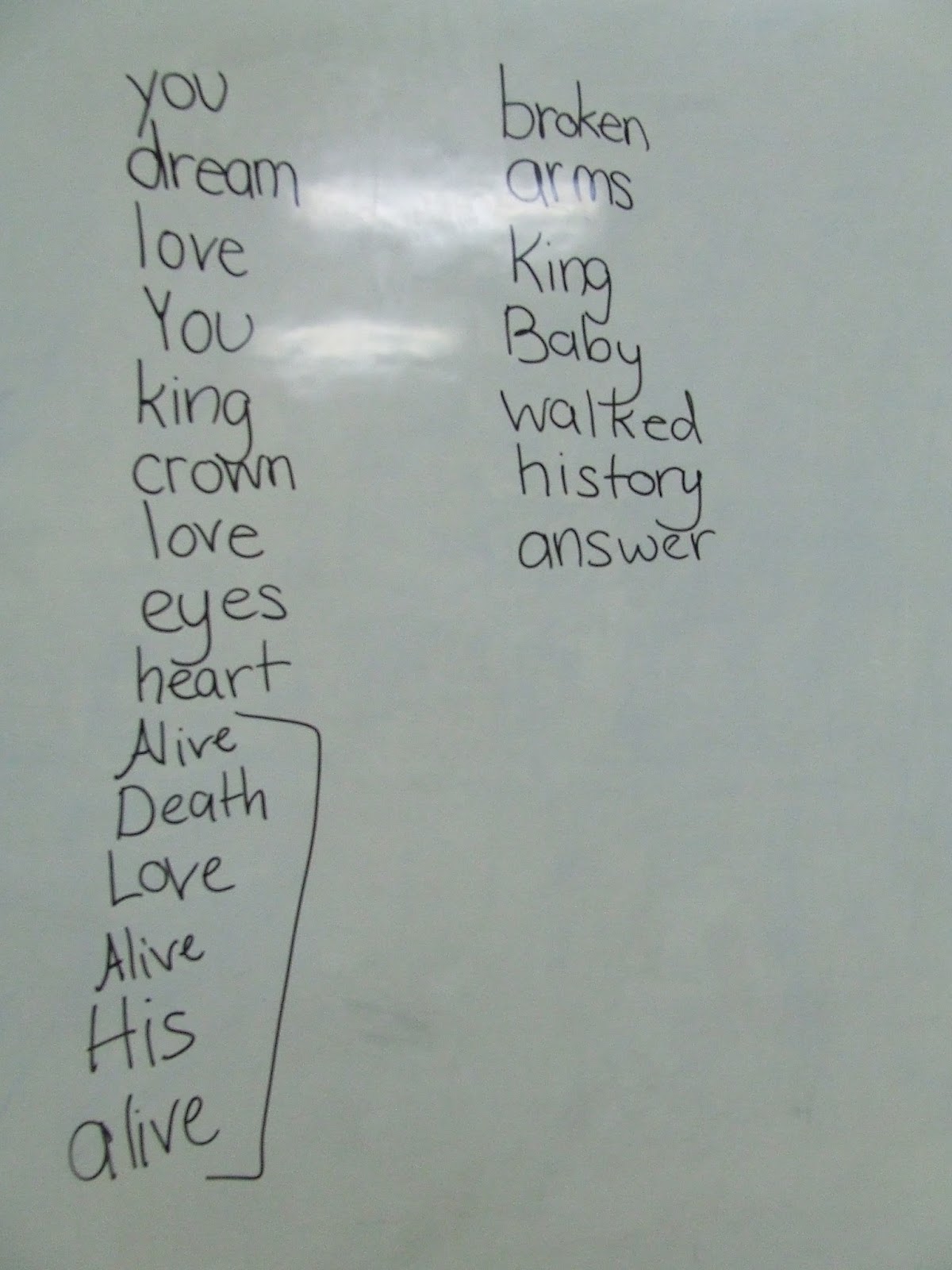 I also asked them about what it means to them to be alive. The shared some really beautiful and meaningful comments. Though this part of class was primarily in Portuguese it was important because it allowed all of us to grow a little closer and share a different part of our culture.

One student shared about how living can mean leaving a legacy even after we die. He shared an example of a friend of his who was killed in 2010. He told us that because of the way she lived her life, she is remembered and continues to be an inspiration today. One way that the lessons she learned and the person she was lives on is through the journals that she wrote about her faith and spiritual journey. He told us that they are going to be published soon.

Another student shared that the wants to make the most of his years, months, weeks, moments and seconds to be the best that he can be.

Another student shared that our lives touch so many other lives and that because of that when we live caring for others, being there for them, and helping them we make a significant difference that lasts beyond our lives.

Some other things that students mentioned in regard to what it means to live included: being present, being a part of the action (the verb), being remembered, "waking up to the Lord." 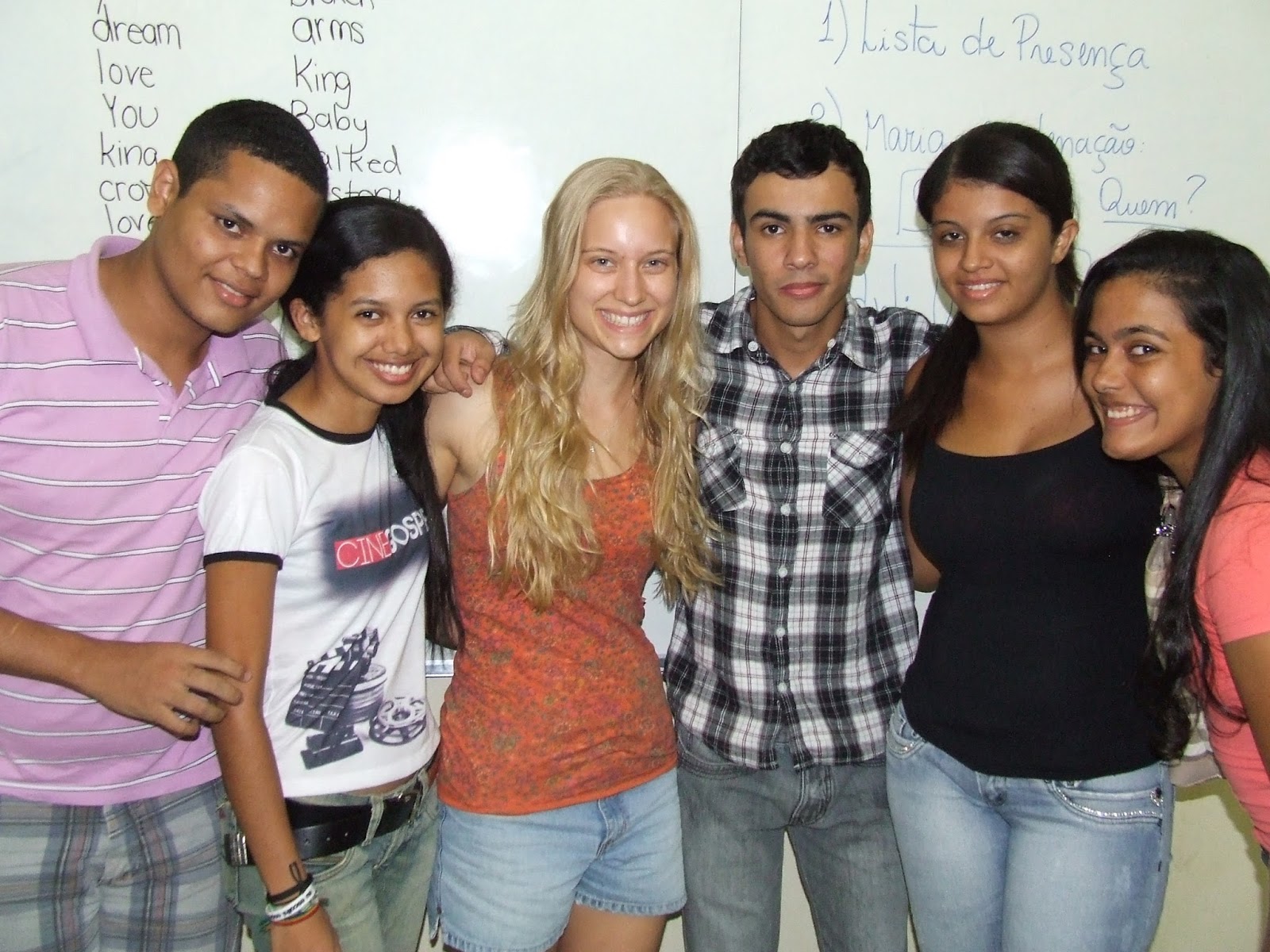 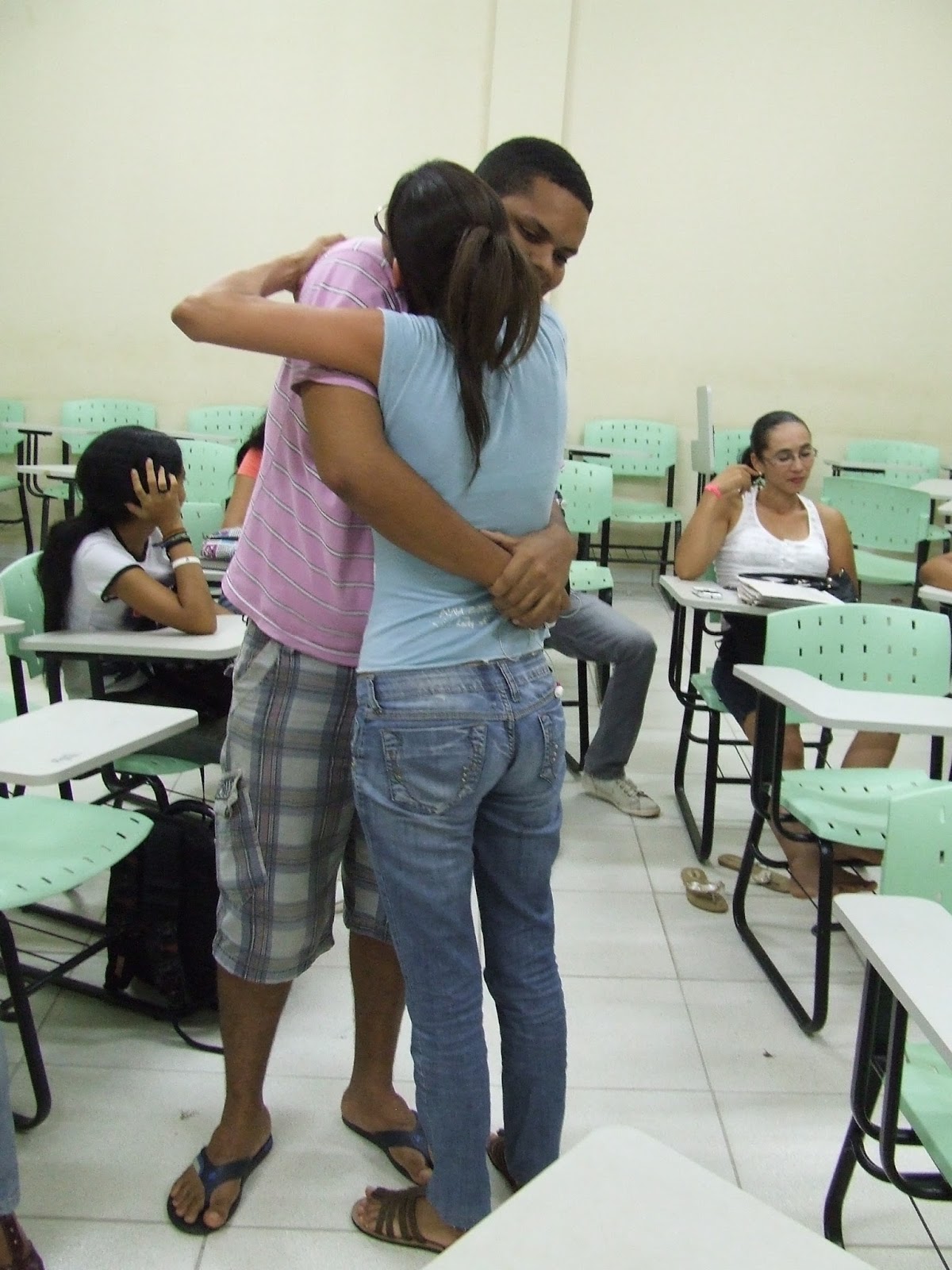 I am so thankful that my students and their willingness to go beyond the surface level in our class conversations. :)

Posted by Brazil & United States at Monday, September 16, 2013 No comments: 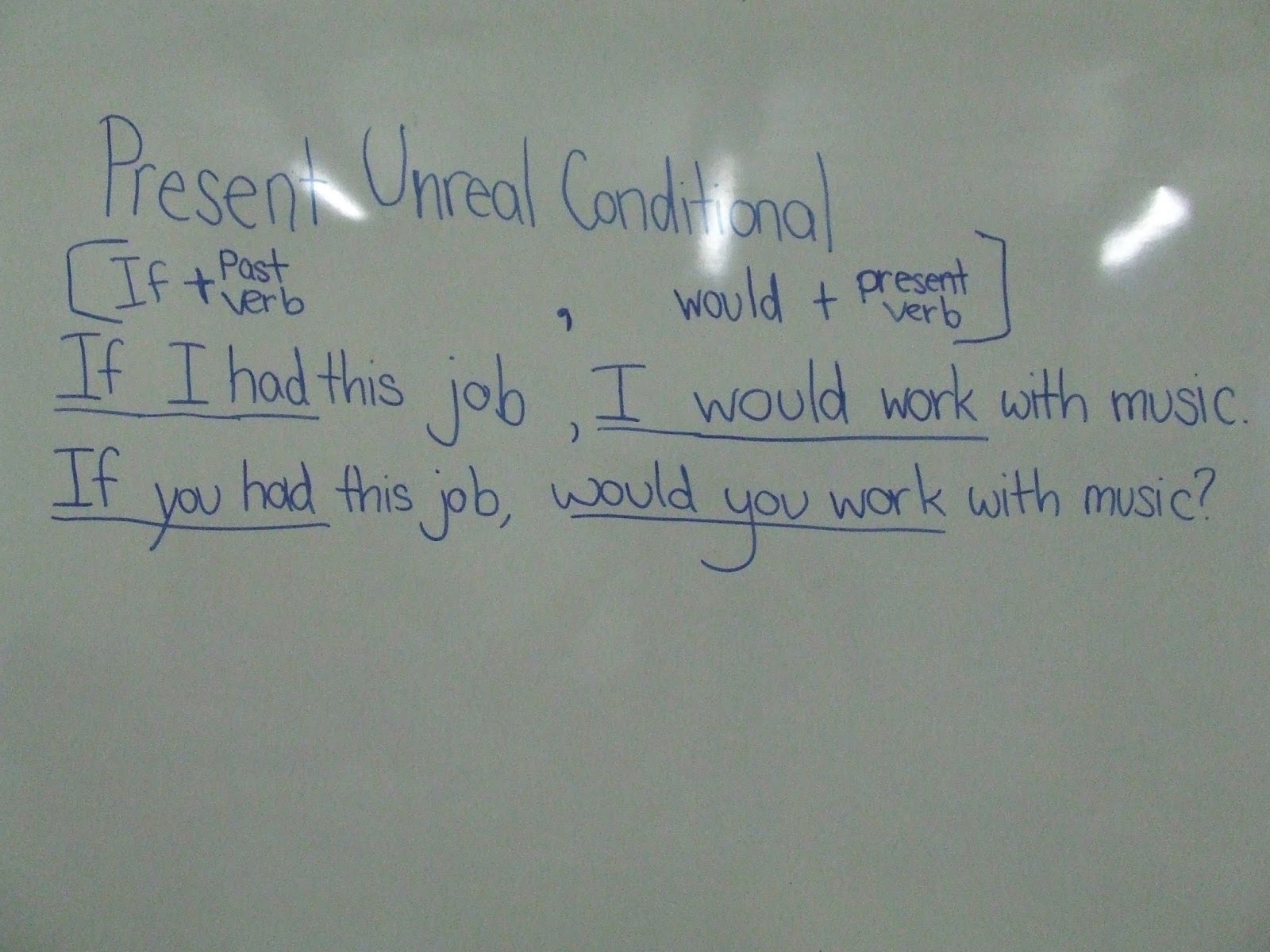 Students who missed class on Tuesday heard about the activity that we did and requested that we do it again, so we did! This time I was able to get some pictures: 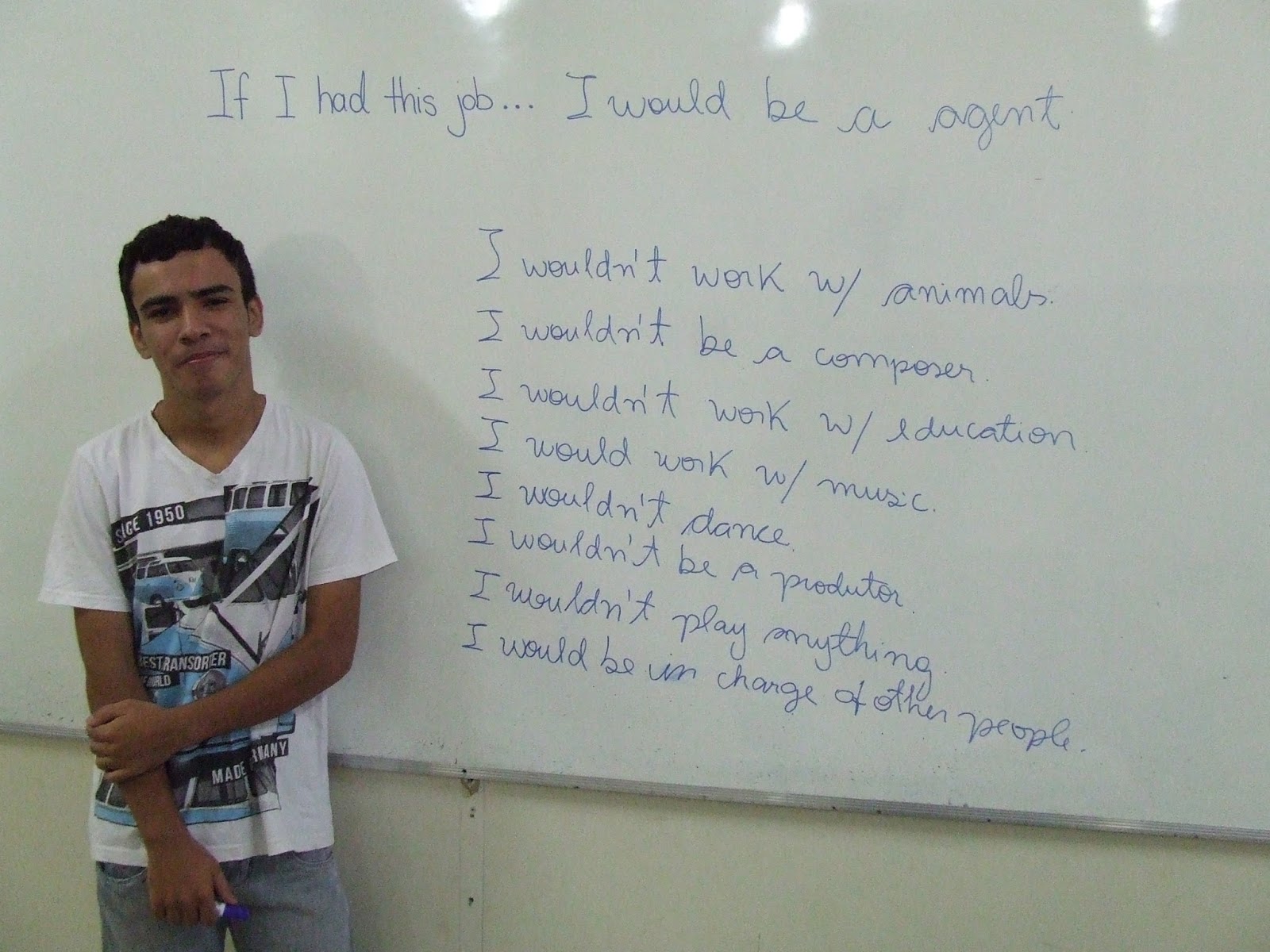 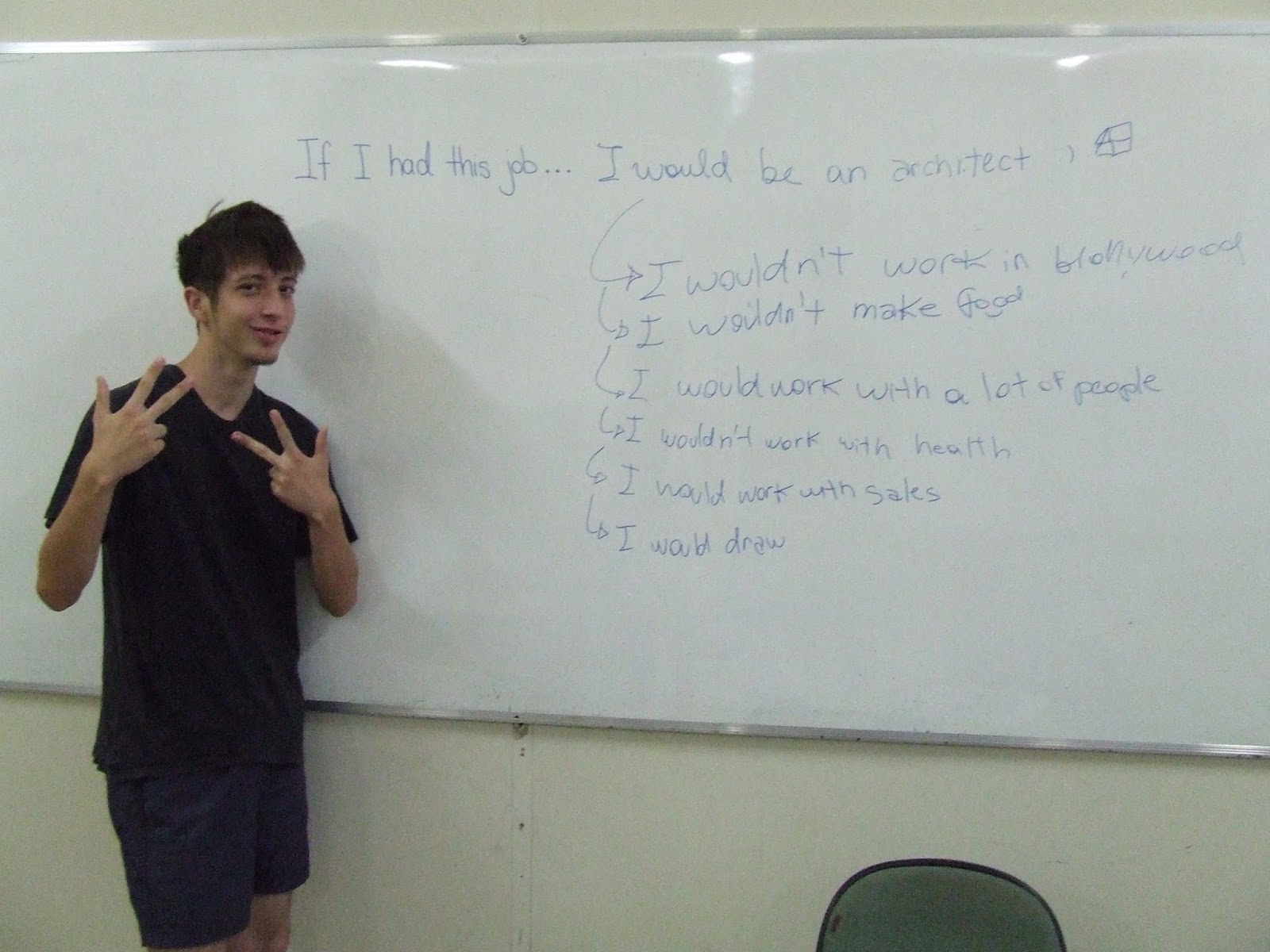 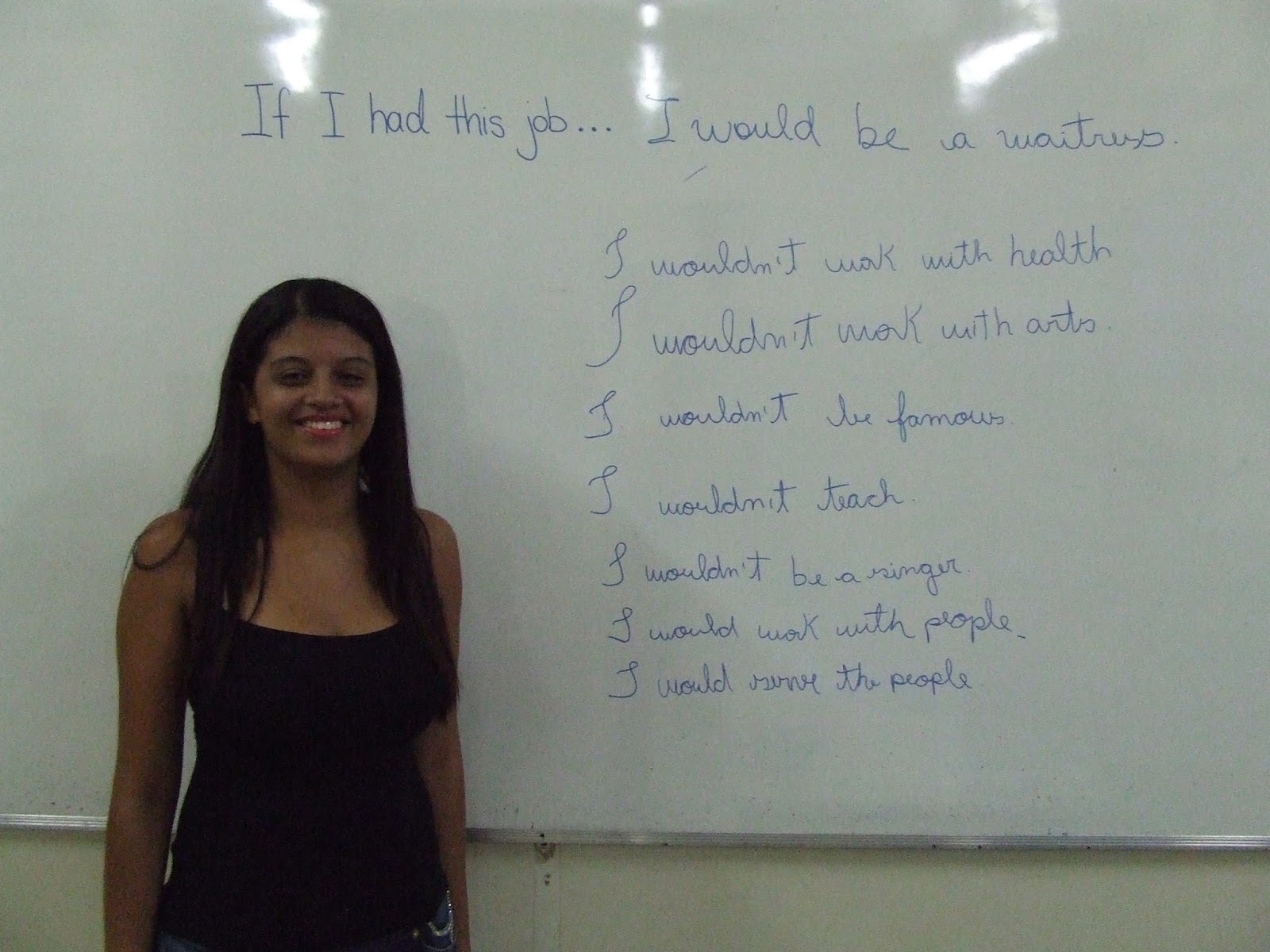 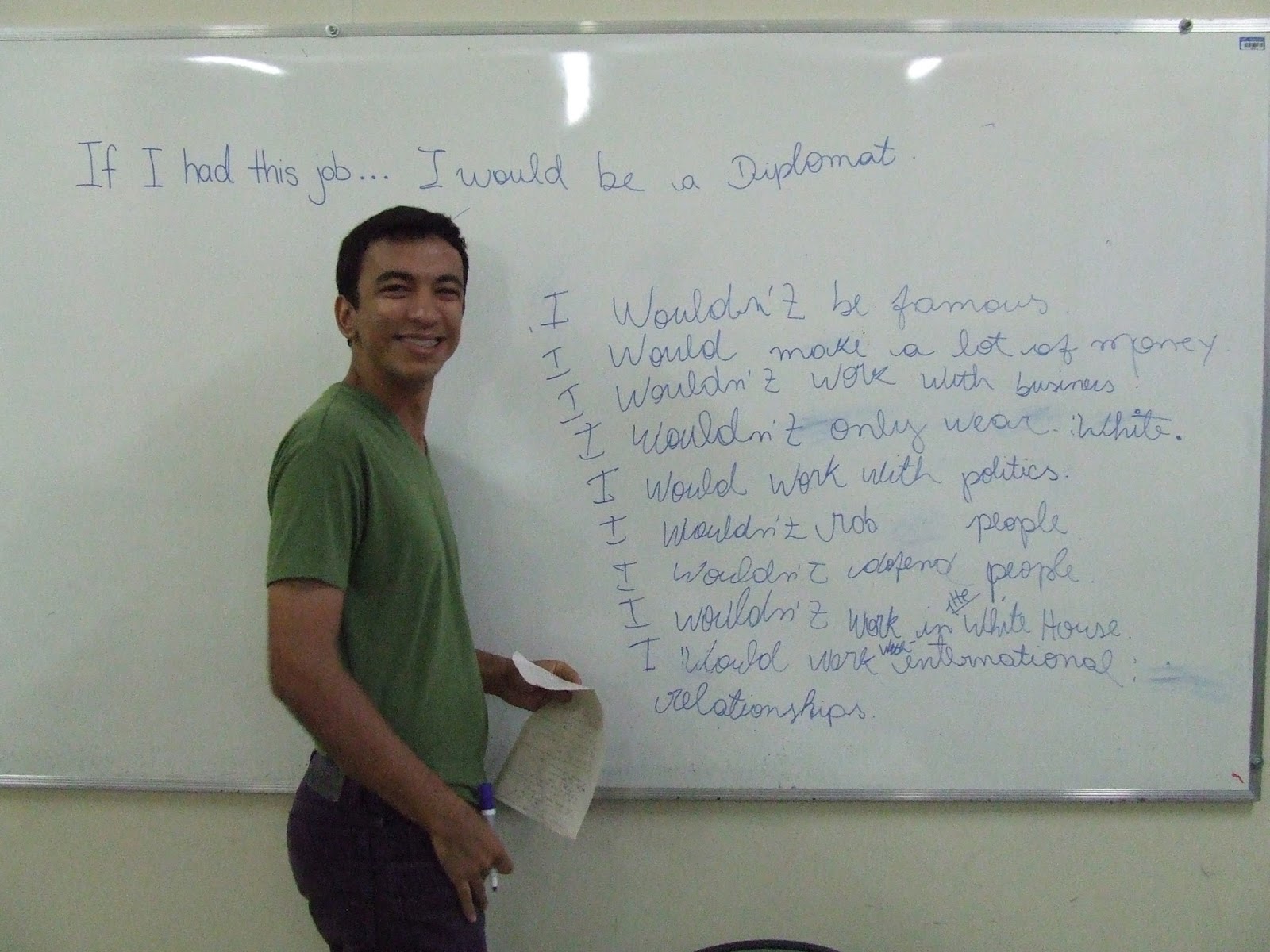 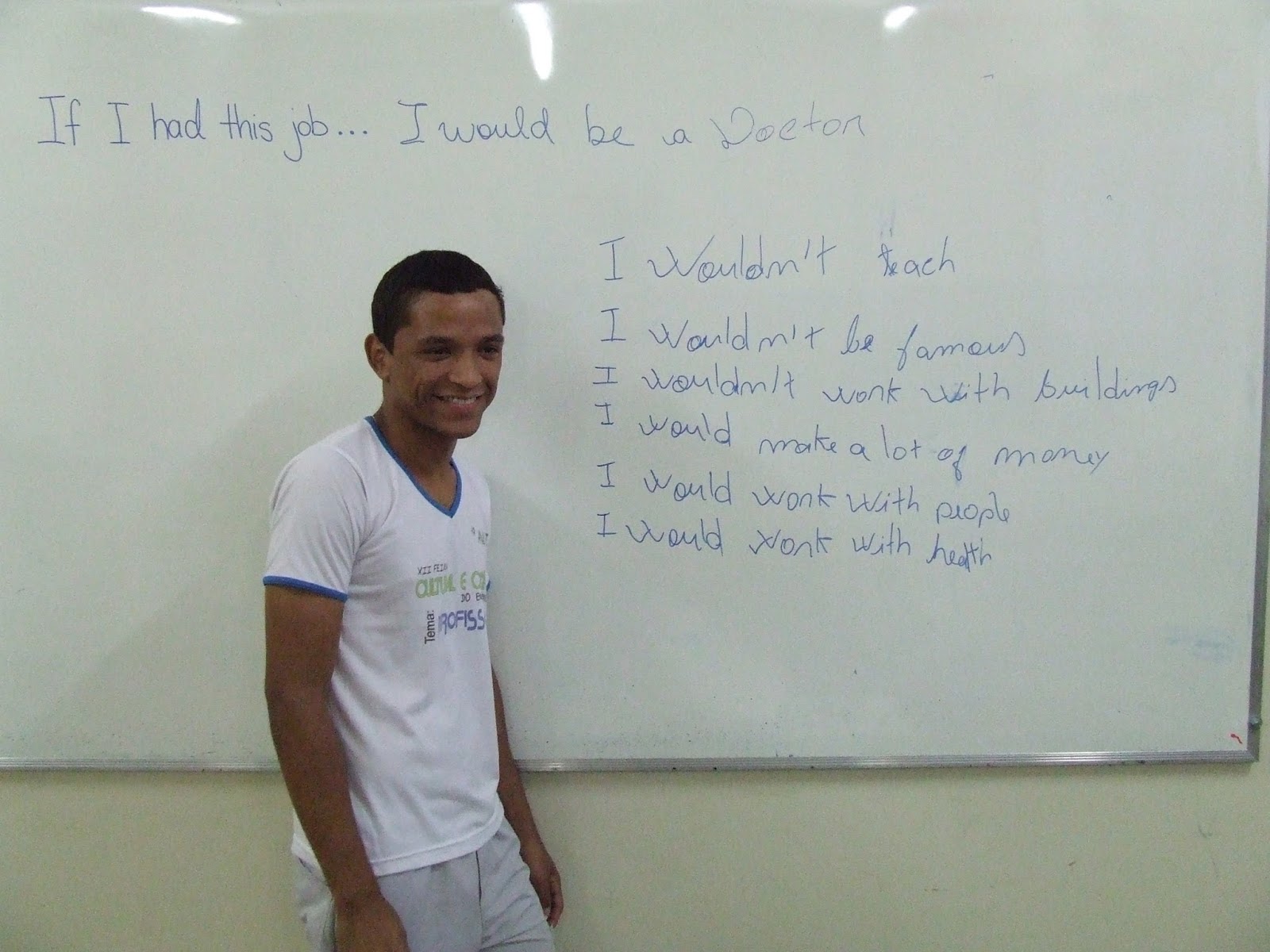 Posted by Brazil & United States at Sunday, September 15, 2013 No comments:

To present the Simple Past I asked the following questions:
What did you do yesterday? [students formed 2 columns: regular and irregular verbs]
When did all these things happen? [in the past]
Are they still happening now? [no]
When we talk about the past, what happens to regular verbs?  [+ ed]
And the irregular verbs?
How do you know which verbs are regular and which are irregular? [Practice]

Then I handed out this worksheet with irregular verbs as a reference tool. 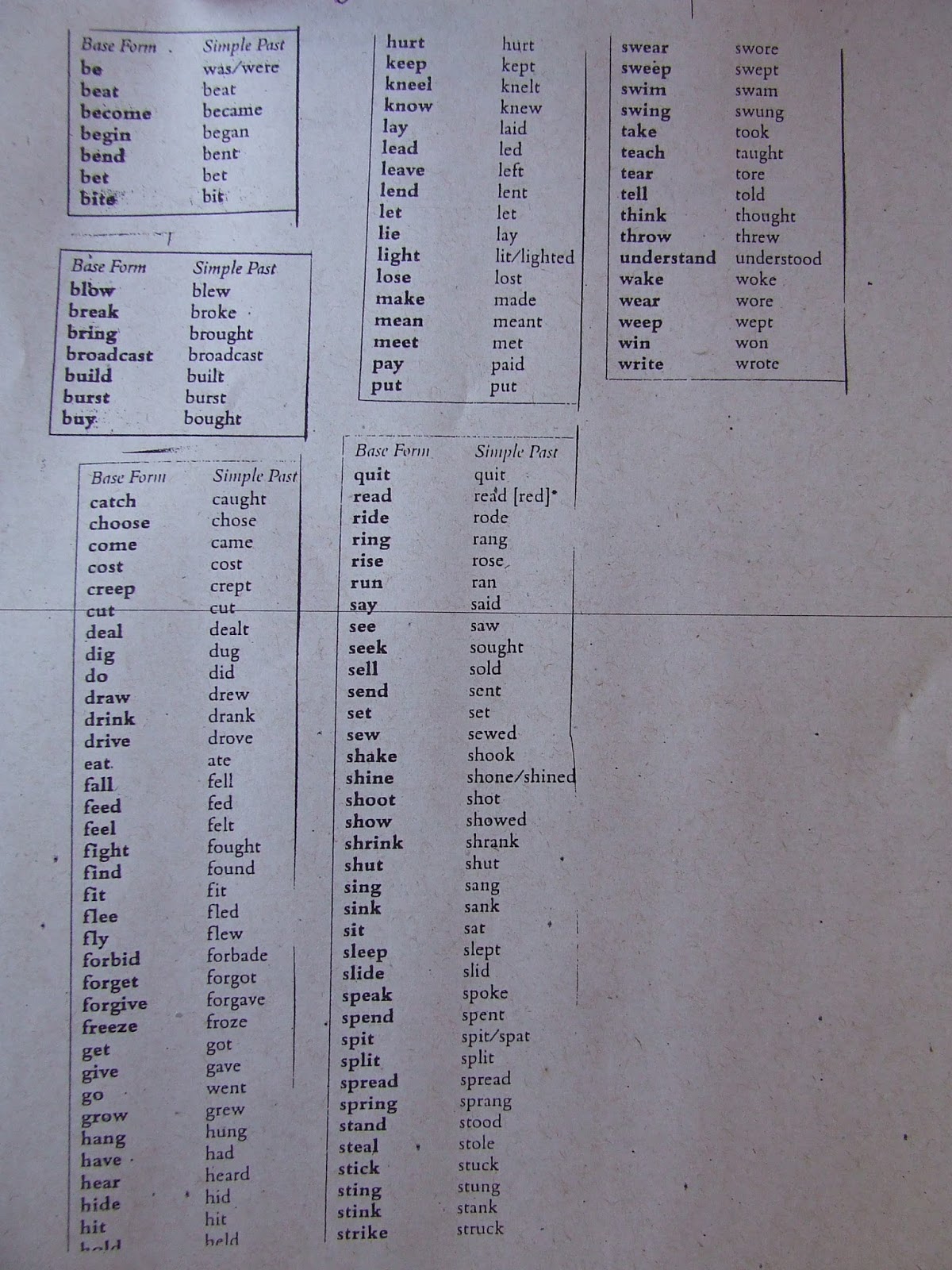 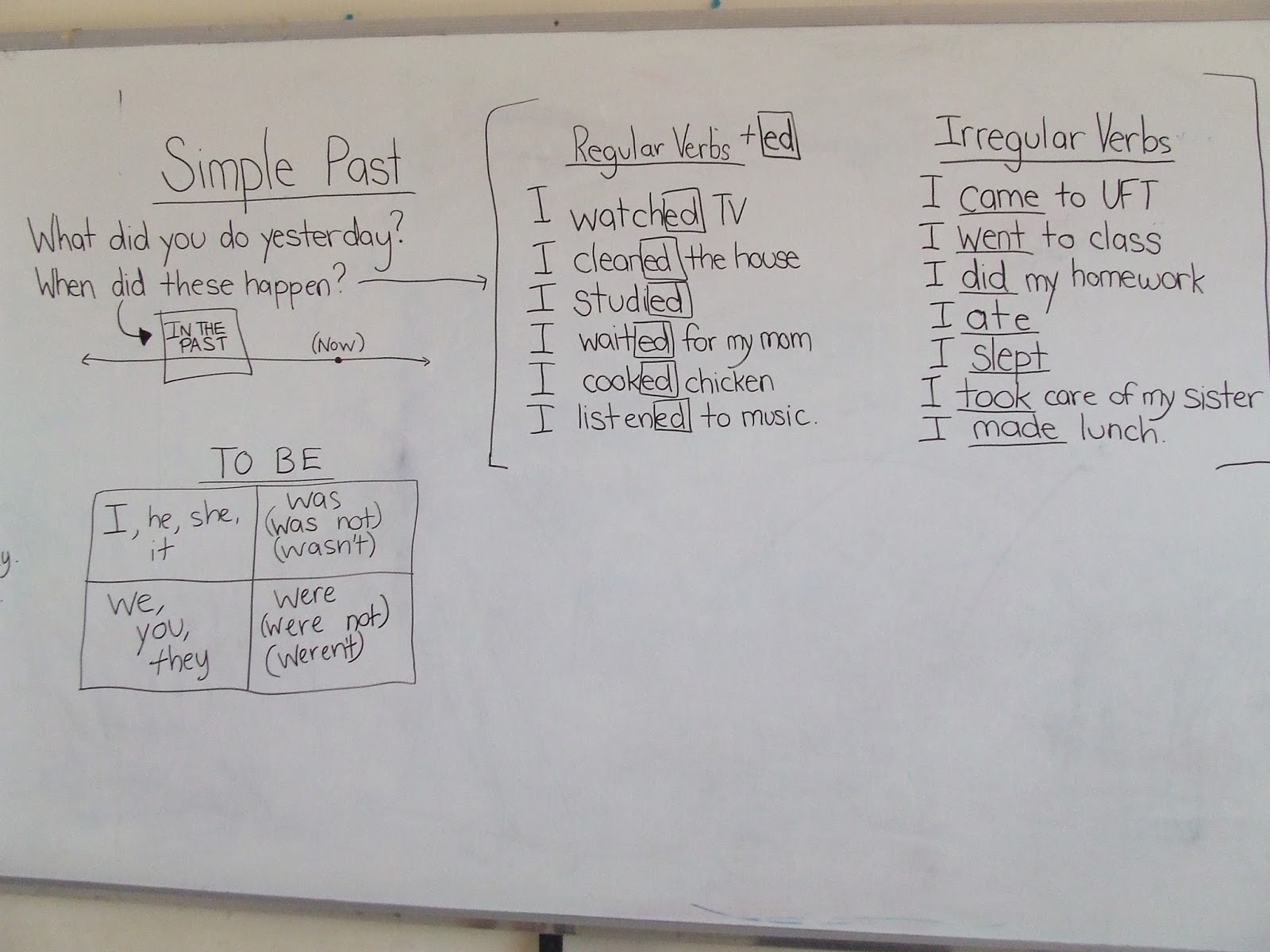 Next I presented how to ask questions and write negative statements and contractions. 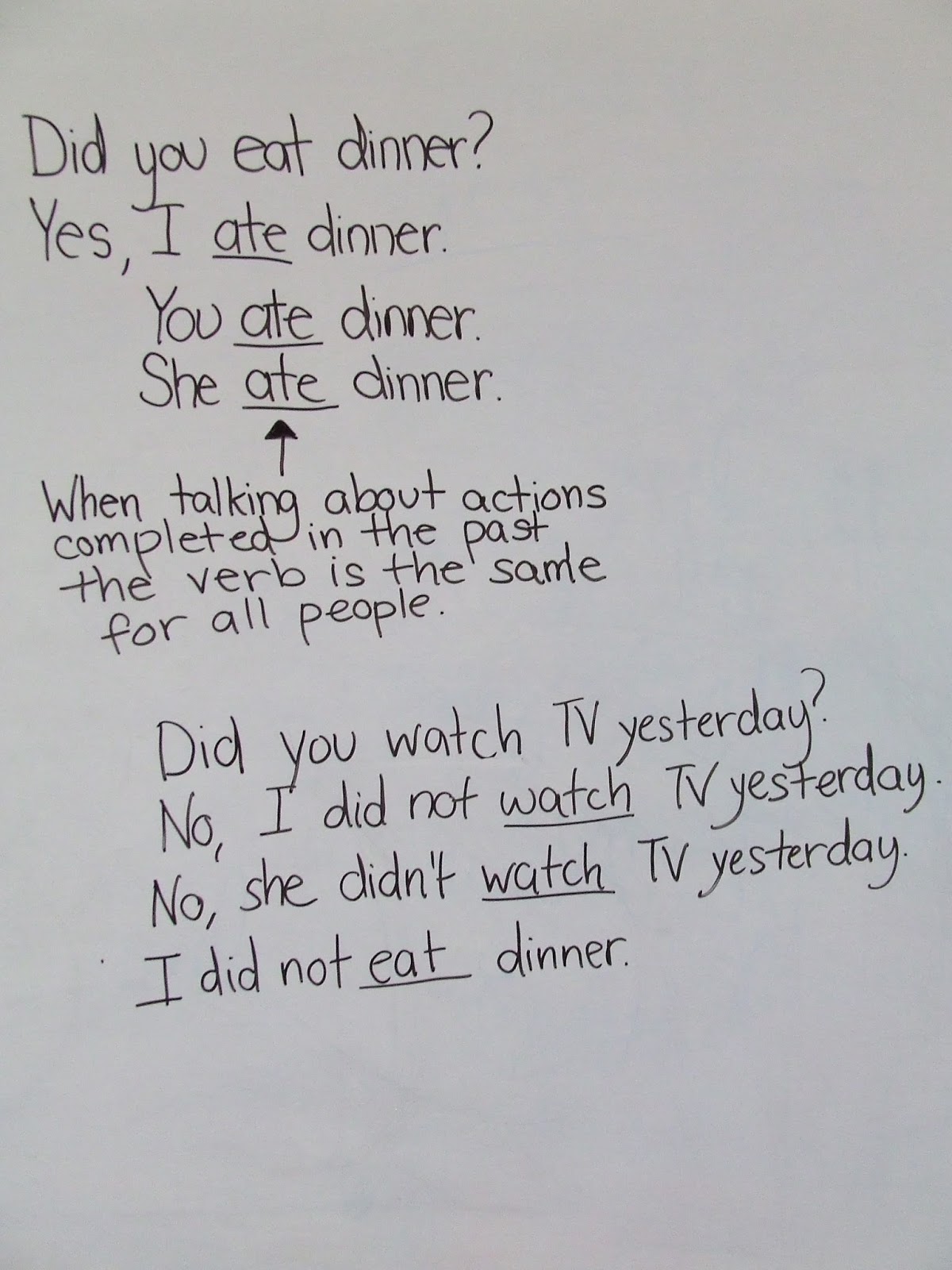 When the answer to a question about past events is negative, the verb stays the same (infinitive).


After the presentation, students did a small group activity in which they wrote 5 questions about what people did "yesterday" in a photo. Then they asked each other their questions and wrote their responses. The were instructed to write some questions that had affirmative answers and some that have negative answers. 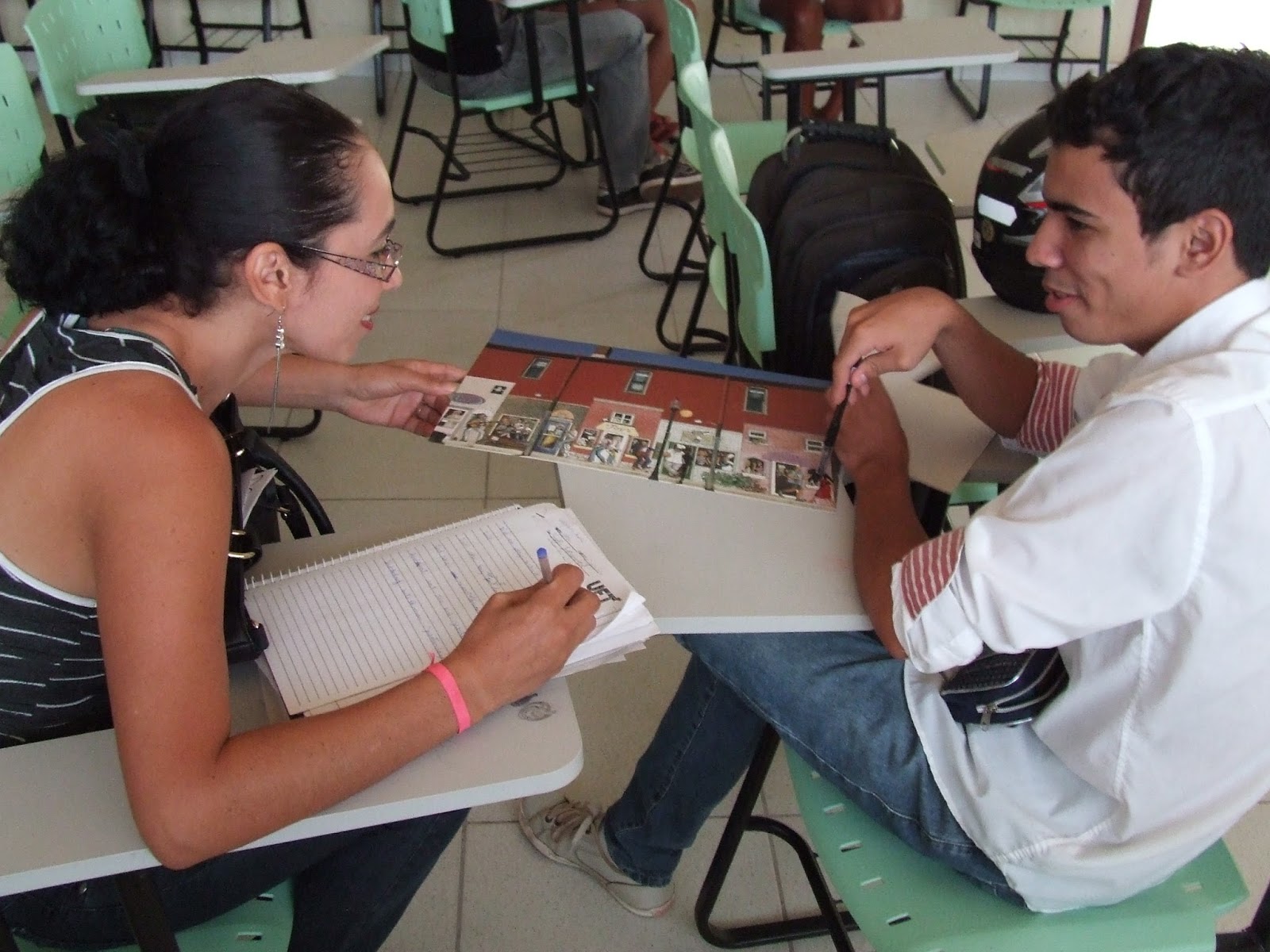 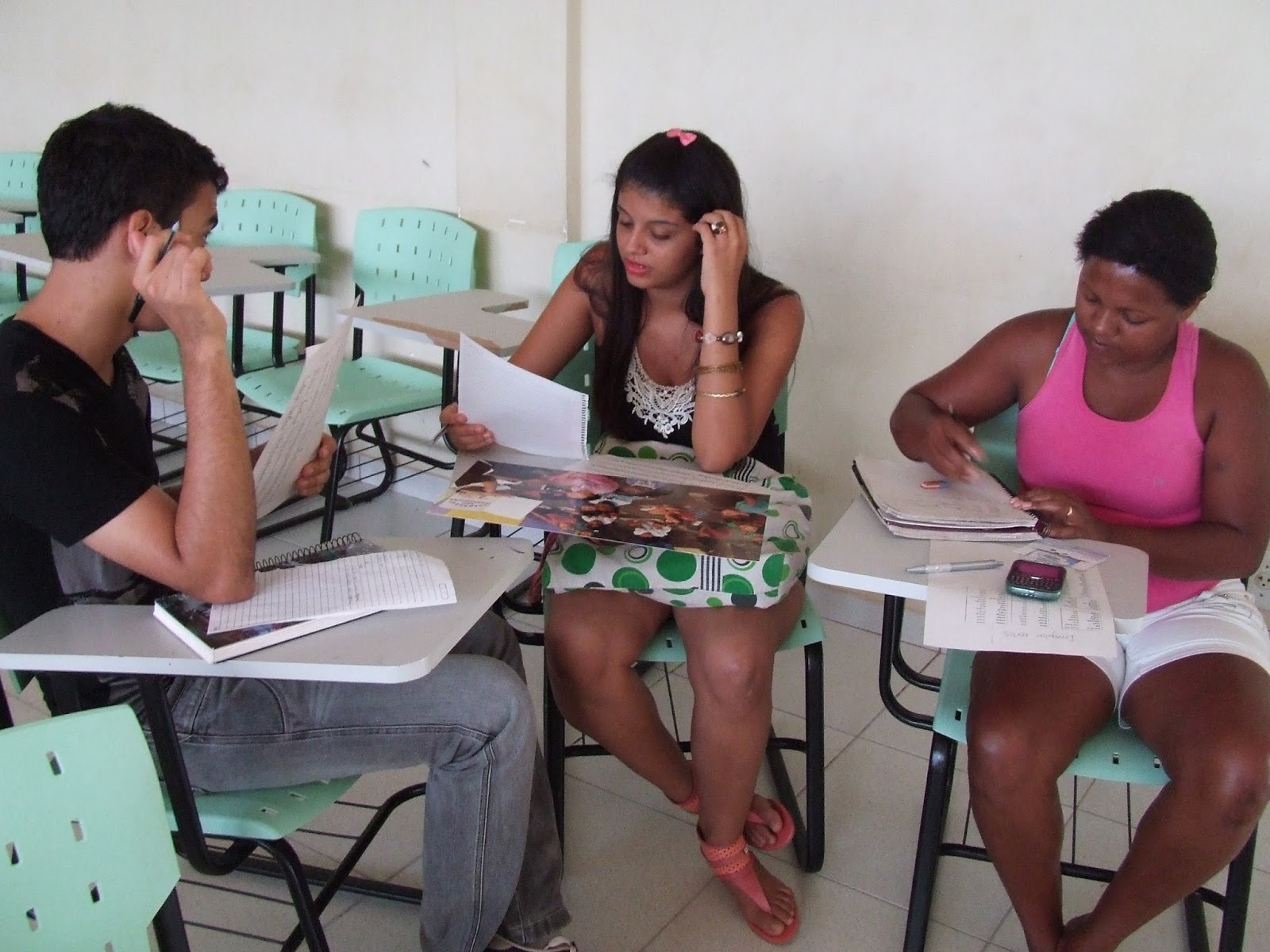 Posted by Brazil & United States at Thursday, September 12, 2013 No comments:


As a continuation of Thursday's Basic English class we did activities using the present unreal conditional in conversation hour today.

We did a quick review (see Basic English for Letras students 5/9 for more details) and then students shared their answers to the following questions, in pairs.

If you could live anywhere in the world, where would you live?
What would you do if you won $1,000,000?
If you had a superpower, what would it be and why?

The next activity was called "If I had this job..."

They asked them questions until they discovered what the job was. The student who answered wrote their answers on the board (to practice writing and for the class to remember what was already spoken).

Leo was an astronaut. Patrick was a writer. Mariana was a singer. Arthur was a composer and Kellen was a Stylist.

Posted by Brazil & United States at Thursday, September 12, 2013 No comments:

Brazil & United States
Araguaína, Tocantins, Brazil
Hi! Our names are Francesca and Danielle and we are your 2013 Fulbright English Teaching Assistants. We intend to provide you opportunities to interact and to learn more. Join us! 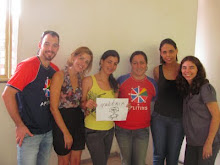